Recently, I wanted to apply some plug-ins of the Process Mining tool-set ProM on a real-life event log that contained a bit more attributes than the usual concept:name and time:timestamp for each event. This event log contained 155,000 cases and about 1.2 million events, each with 30 attributes. Definitely this is not a small event log, but it is also far away from being Big Data. The compressed XES file just takes about 17 MB of disk space.

The first step I wanted to do with ProM was to get rid of some of the attributes. I knew that there were some duplicates and unnecessary attributes. As I did not want to fiddle around with regular expressions and some text editor each time I would get an event log like this, I wrote a small ProM plug-in that allows to remove and manipulate attributes from an event log. (Now part of the LogFiltering package)

I started ProM and tried to open the event log with the option ProM log files (Naive), assuming that a 5 GB memory limit should be enough for a 17 MB event log and my plug-in would be much faster than with the ProM log files (Buffered) option. After a few minutes all I got was a java.lang.OutOfMemoryError: Java heap space :(.

Still, one thing kept me wondering:

Why would an 17 MB event log take more than 5 GB of memory in ProM?

Ok, to be fair, the uncompressed size of the event log was about 1 GB, still, why does 1 GB highly verbose XML results in more than 5 GB heap space usage in ProM? I used the YourKit profiler and had a look on how the naive XES implementation in ProM (OpenXES) handles event logs and created an alternative implementation in the XESLite package that uses less resources. If you don’t want to read the whole story just grab the ProM nightly build, install the XESLite package and use the option ProM log files (Unbuffered & Lightweight) to open a log file.

It appears that most memory is occupied by instances of char[] and java.lang.String. Actually, most of the the 27 million char[] instances contain simply the real String data and the about 650 MB used for the String instances is just the overhead of having the String object. (Please note that in YourKit Shallow size does not include the size of other references objects) Also noteworthy is that there are almost 14 million instance of the class XAttributeMapLazyImpl taking 330 MB of memory, but more about this one later.

Looking at the usual structure of an event log it is not surprising to see that a lot of the memory is taken up by instances of java.lang.String. After all, every attribute makes use of a String as key, and for most event logs every event contains the attribute concept:name with the name of the event. What may come as a surprise is that in the current OpenXES implementation, for every attribute there is a separate String instance storing the key. For my event log, that results in having the String “concept:name” stored 1,200,000 times in the Java heap space. Certainly this is not desirable at all.

So how to fix this problem? There is a general design pattern called Flyweight that should be followed here. In Java there is even a standard implementation for java.lang.String in the JDK that is String.intern(). Java maintains an internal pool of Strings and the method String.intern() will return a String from this pool, if possible. Unfortunately, in Java 6 this mechanism is rather restricted, as the String pool resides in the PermGen memory and is generally not performing very well with a lot of Strings. Fortunately, the Guava project provides an easy to use alternative with the class Interners.

The second issue in the current (naive) OpenXES implementation is that for each attribute in my event log, there is an XAttributeMapLazyImpl taking up precious memory (330 MB in my case). This class just acts as a wrapper class for possible attributes of attributes, i.e. meta attributes, even though my event log does not contain any such meta attributes. One simple solution to this problem would be to just not allocate this wrapper class for each attribute, and, instead, require people to supply their own instance of XAttributeMap using the method setAttributes(XAttributeMap map), in case meta-attribute are really needed. Unfortunately this change breaks a lot of existing code. Interestingly, after finishing my alternative implementation, I found out that Michael Westergaard already pointed out the XAttributeMapLazyImpl issue in this blog post 3 years ago. 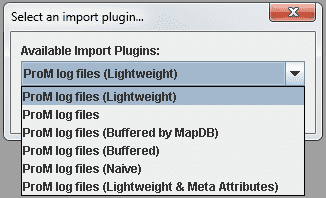 I adressed both issues by creating an alternative XES implementation that is part of the ProM package XESLite. To use it, just grab the ProM nightly build and install XESLite using the package manager. Upon opening an event log there should be a few new options:

Using the Lightweight implementation my event log could be loaded in 65 seconds using just about 1.3 GB of memory instead of throwing a java.lang.OutOfMemoryError with a heap space limit of 5 GB. As you can see in the memory statistic below java.lang.String occupies way less memory and the XAttributeMapLazy instances are gone. There are some other changes, like replacing the UUID of an XEvent with a simple sequential Long and using the Trove THashMap instead of the memory wasting Java HashMap.

The third option Buffered by MapDB is an experimental implementation that uses a different back-end and a different strategy for disk-based buffering. It uses the MapDB project to store a TreeMap of all attributes on disk. In contrast to the OpenXES buffered implementation, which buffers on the level of an event, the buffering is done on the level of a single attribute. Therefore, operations that use the log in a non-sequential way or use just a few attributes may benefit from this buffering strategy. Moreover, MapDB is an active open source project and we would get future improvements for free. I will share more details on the ideas behind the MapDB based implementation in my next blog post.